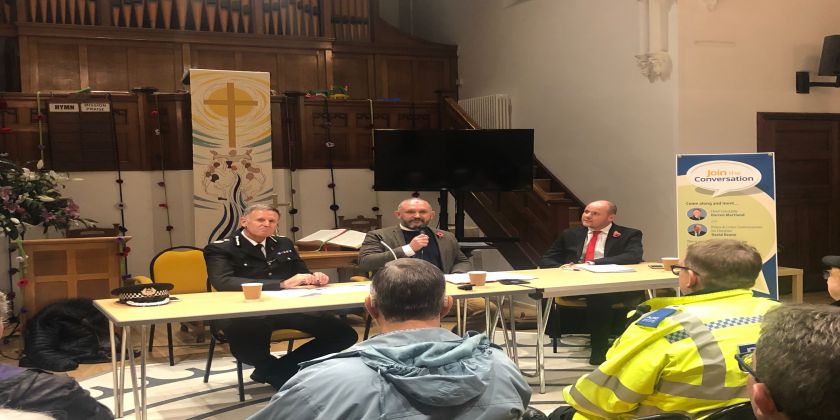 Knife crime, drugs and theft were some the key issues identified by residents in Ellesmere Port as they met with Cheshire’s police and crime commissioner and chief constable to discuss policing issues in their area.

It was the first in series of public engagement event where local residents across Cheshire have been invited to put their questions about local policing to PCC David Keane and CC Darren Martland.

The PCC and the chief assured those in attendance that Cheshire police is carrying out a number of proactive initiatives to address the issues raised.

Residents said they were concerned about drug dealing on the Stanney and Wolverham estates and reported drugs being brought onto the estate by gangs. The chief constable said a lot of work is being done to target suppliers that target local towns in county line drug operations with a number of arrests across Cheshire.

The commissioner also told residents that a new initiative would soon be launching in Ellesmere Port to deal with community issues like drug dealing. The ROC initiative, which is already successfully running in Runcorn and Widnes, will work to increase community resilience ensuring public services and local communities can work together in the right places to tackle the right issues.

One resident raised an issue with young people in the area carrying knives. Both the chief and the commissioner highlighted the proactive initiatives being carried out across Cheshire to tackle knife crime including a range of stop and search tactics and sessions in schools to make young people aware of the dangers carrying weapons can bring.

Another resident said there had been a lot of bike thefts reported in the area. In response, the commissioner highlighted the Bike Register scheme where residents can get security markings on their bikes for free and other proactive initiatives to tackle cycle thefts.

PCC David Keane said: “It was great to see so many local residents with a real passion and dedication to making their communities safer give up their free time to attend this event.

“It was interesting to hear on a local level what the key policing issues are for people in Ellesmere Port and discuss how we make improvements to make their communities safer.

“With police resources more stretched than ever, it’s important that we talk to local people about their priorities for policing to ensure we are delivering the best possible service.

“I look forward to meeting more residents at future events planned across the county in the coming weeks.”

CC Darren Martland added: “We are committed to delivering a neighbourhood policing service and putting the priorities of local communities at the forefront of everything we do.

“Our officers and PCSOs forge strong relationships with our communities to ensure crime and anti-social behaviour is dealt with as quickly and as effectively as possible.

“We appreciate the feedback from local residents in the area and I would like to reassurance residents that the problems raised at the events are being dealt with proactively by the local policing team.”

Events are also planned in Northwich, Widnes and Macclesfield later in November and December with further events held in Chester, Crewe, Runcorn and Warrington in the New Year. Please check the Cheshire PCC website for further details www.cheshire-pcc.gov.uk

If you would like to submit a question for the PCC or chief constable ahead of the meetings, please email it to [email protected]